Fall arrived exactly as predicted by the calendar. No sooner had we adapted to days that stretched well past 10 p.m. – pleased or regretful of the extra time to work outdoors – than we found ourselves scrambling to get the ponies in before dark. We spent our summer simultaneously planting and building our garden between near-weekly trips to Seattle, five hours away, where Gary underwent chemotherapy from May through August. Seedlings planted in the optimism of a day grew haplessly in their flats for months awaiting permanent homes as we rushed to fence in a sanctuary from voles, gophers, deer and other locavores.

I had planted two packets of tomato seeds in little 1-inch square soil blocks, not thinking that 200 seeds might actually yield nearly 200 plants well before we had space and protection for them.  We took the giant flat trailer to the edge of town and picked up sixteen old 4’ x 4’ orchard boxes to use as containers, which I proceeded to plant with tomatoes and basil as densely as though they were New York tenements, telling myself it was French intensive gardening. I gave away forty starts to neighbors; still, well over a hundred tomato plants were homeless. As the plants grew spindly and began to flower in their tiny soil cubes, Gary could see I was never going to get them into the ground. He took the tractor and scraped the soil with its front bucket, dumped a few buckets of compost on the soil, and began planting. Our largest, most perfect tomatoes have come from the plants he saved. Far more, still green, huddled under cover from excessive rain and danger of frost until we pulled them in early October.

Our enclosed garden sits alongside the ponies’ corral. Behind it is our high tunnel, still under construction.

We still have tomatoes spread out on tables to ripen, though some rot instead and others are destined for green tomato stew.  In the garden we have harvested everything but one lone head of pak choi destined for dinner tonight, and a few broccoli, cauliflower and cabbage plants.  Pumpkins never got beyond golf-ball stage, and we were too late in planting cucumbers, watermelon, butternut and acorn squash to get anything but flowers, though we did eat some of those.

Gary, once he’d finished haying in June, focused on expanding the ponies’ corral. He opened their pasture into some woods, and created a second, much larger area of pasture and forested area for graze and shelter during our trips to Seattle. Slowed but not stopped by the effects of chemo, he continued to expand the ponies’ pasture as grass grew brittle in the summer’s heat. With the help of friends and neighbors, the ponies did fine even during our longest absences. 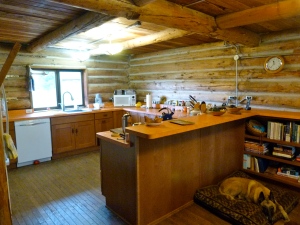 The remodeled kitchen is a joy to cook in. There is a wall of bookshelves for my cookbooks behind Ella, and a spot for barstools if we move her bed!

If it hadn’t been for visitors, we might have never found time to hike the land and paddle around our pond. Annette and Terry were first, arriving in early July, just after our kitchen remodel was more or less complete. They had the wisdom to stay in town, spending a day with us after touring around the Columbia Gorge a bit. A couple of weeks later, Gary painted the guest bedroom floor while I ran into town to buy a bed, just in time for his niece Kristen’s visit. It was remarkable how much better Gary felt the week she was with us. That magic worked again when our friend Heidi came. Heidi moved from Alaska to southern Oregon about when we did; she, Gary and my cousin Glenn have been friends since childhood. She took care of the ponies, and even trimmed the Fjords’ manes, during one of our longer trips to Seattle; when we got back home, Glenn and his wife Terri were here too. 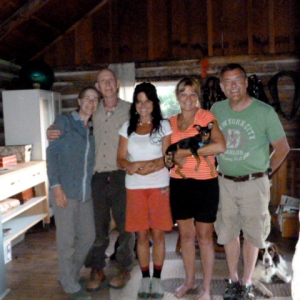 Ella took this photo of (from left) me, Gary, Heidi, Terri (with Charlie), Glenn and Mercedes (mid-August, just at the end of Gary’s chemo).

Ella spent the summer cooling off in the pond and chasing birds. She doesn’t chase large birds – wild turkeys, grouse, or the heron who calls our pond home – but she does run after robins, swallows, and other little birds fully capable of avoiding her. We saw her come running toward a hatchling, fully expecting it to fly; when it didn’t  – couldn’t, poor thing, she barked at it. Didn’t it know how to play? She didn’t touch the little guy, but she surely gave it a good fright.

Our friend Terry came up with the idea to extend our new roof partially over the deck. The old cedar shingles are now such good kindling it’s frightening to think they spent the summer on top of our cabin!

Autumn arrived cold and rainy, and we lit our first fire of the season on September 21st. Not a moment too soon – perhaps a week or so too late – we replaced our derelict cedar shake shingle roof with a new metal roof. After a prolonged and beautiful spell of cool air and warm sunshine, we’ve had a week or two of off-and-on rain, though evenings have mostly stayed above freezing. Preparations for winter are ongoing: Gary bought a snowplow blade for the tractor, more hay for the ponies (just in case), and has gathered, split and stacked four cords of wood, regaining some of his muscle in the process. 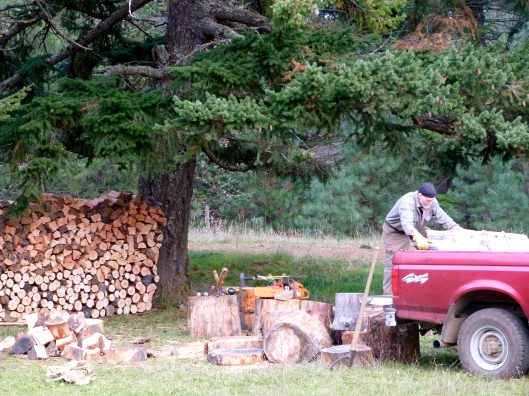 Gary unloads large stumps he’d wrestled onto the truck, and prepares to split and stack the wood.

Scans following chemotherapy showed that Gary’s tumors stabilized, more or less, during his treatment, then grew a bit as of mid-September. This was a particularly painful time for us both, as it became clear that the doctors are not fighting to win, but trying to keep Gary as healthy as possible for as long as possible. Shortly following his mid-September scans, Gary had some pretty severe abdominal pain caused by the tumors. For the first time he was suffering not from the treatment but from the disease. There was talk of radio-frequency ablation to get rid of a couple of the tumors, but as it turns out they are all either too large or in areas too sensitive to be treated.

Gary put up the bell (yes, filched from Chimney Rock); now we can call each other in from the fields and forest, and visitors can announce themselves. He’s with Ben and, of course, Ella.

The news does get better. We consulted a naturopathic oncologist in Portland, who has been quite helpful. The Seattle radiologist referred us to a local hospital for a couple of weeks of radiation treatment to reduce the pain, but by the time we met with the local radiologist the pain was gone. That was in early October, and the pain has never returned. Gary continues to do anything that might aid his healing. He is meditating and doing guided imagery work daily and even as we sleep. A friend got us started wheatgrass-juicing. He is reducing carbohydrates and starting to add meat back into his diet. Family, friends and strangers have added their prayers and good energy toward his healing as well, and some have made their way to our remote spot here. Gary’s oldest brother, whom he hadn’t seen in years, visited this week. Gary’s young friend Ben made the trip as well, helping with all kinds of things, including building a fire pit near the pond. Love and friendship are great healers. We are exceedingly grateful for this reprieve. It may be that the tumors have shifted to a better spot, or it may be a miracle in the making. Every day is a miracle, really, as we go about our work and play together in this beautiful spot. 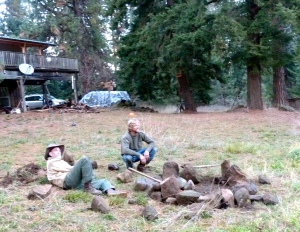 Ben and Gary working on the fire pit near the pond. Now we can sit under the stars on the rocks by a warming fire any time we want.

The shorter days are bringing us more time to read and write, think and plan and dream. Writing came hard to me this summer. It was a confusion of joyful discovery of Blue Moon Stead in the summertime, healing visits from loving friends, and the agony of disease and treatment. As we settle in for the winter, I hope to stay in closer touch.