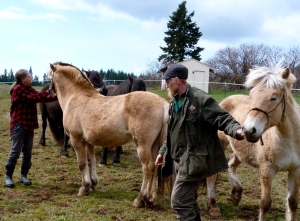 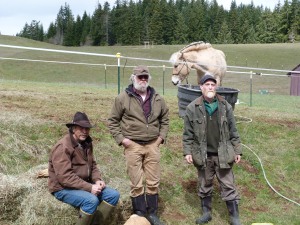 Gary with Ken, the ponies’ breeder, and his friend Bill, with Konall in the background.

Thursday was my first night alone here.  Gary had taken his truck and trailer to Madras, Oregon, to the Small Farm Journal’s annual auction of horse-drawn paraphernalia. That left me to care for our animal family, which now includes four ponies. Gary’s been acquiring harnesses and equipment so we can use our sturdy little ponies to drive and do draft work.

Not long after sunrise Friday, Ella and I woke to a deep, rumbling wind. We were headed straight out to see our four charges when, what to my wondering, pre-caffinated eyes should appear, but four ponies on the wrong side of the fence! The gate was wide open.

The ponies had arrived Monday, two days before we expected them. I left Gary still working on the fence to their pasture around 7:00 that evening, catching the phone just as I stepped in the door. The caller was a helpful stranger a few miles from here, saying a couple of gentlemen (the ponies’ breeder, Ken and his friend Bill) were stuck on a muddy, primitive road with a horse trailer and wanted to know if they were close enough to simply lead the horses home. Almost nothing is close enough for that. They would have to get the trailer unstuck, and I agreed to meet them in downtown White Salmon.  I ran to the pasture to tell Gary.

“The ponies are coming!” I cried.

Ella and I jumped in the car and drove to the bottom of the hill to wait for a truck with a horse trailer. It was well past Ella’s dinner time and mine, but if she wondered at the long wait she made no mention. Finally, the trailer appeared in my rear view mirror and I led it slowly up the long, winding road home.  When we arrived, we found an entirely new pasture fenced in; it was small, but had a white band of electric tape the horses would recognize and respect. Gary had worked quickly. 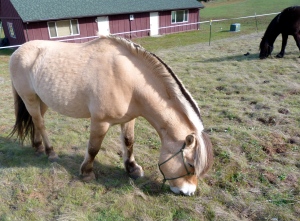 Drader, with his handsome dark forelock and black-striped mane. Duchess is in the background.

Taken from a much larger herd, the ponies now found themselves a foursome in a green pasture far from their snowy native Wisconsin. Drader and Konall are Norwegian Fjords, handsome geldings with Mohawk manes that show off their coloring. Drader, who has a striking two-toned forelock in addition to the black center stripe in his mane, quickly established himself as the lead pony. Konall is the baby of the group, four years old.

“Drader was low man on the totem pole back home,” Ken told us. 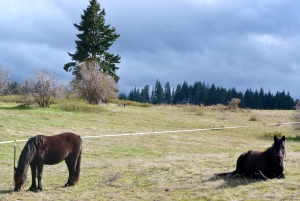 Bess relaxes while Duchess grazes. Or is it the other way around?

Bess and Duchess are Dales ponies, full sisters. Though Bess is older, Duchess is taller and more confident. Bess shied at every approach, and only Gary was able to get hold of her at first. Konall is a lover boy, ready to be petted and made over. Duchess, too, loves attention. She’s sweeter to us than to the others; she will gratuitously take a nip at her sister or Konall. Drader is calm and comfortable being petted or ridden. I make it a point to spend lots of time in the pasture, weeding the horse-toxic lupine and shoveling poop, bringing the occasional carrot, using the curry comb, and always generous with attention. The ponies are curious and every day more eager to approach me, even Bess, who only flinches now when I grab her halter.

That’s when she’s in the corral. Wandering free is a different story.

When I found the ponies, they were still close to the gate, browsing. Ella knew this was wrong, and bounced around nervously. I had to stay calm.  I sang my hellos in the usual way, petting Drader, who was closest.  Then I walked a few steps away to get hay.  The ponies like the green grass, but hay is what they’ve been eating in Wisconsin, where the snow is still a foot or better on the ground; it’s a sort of comfort food.

Hay got their attention. But they also sensed my intention, and drifted away.

I got hold of Drader’s halter as he was eating the hay. Duchess came near, and I grabbed her too. I knew I needed one Fjord and one Dales pony to be sure of getting all four back in the corral, as they bond to their own kind and would not want to be long separated.  There was no chance of me getting Bess in the first round.

Drader was reasonably obliging, but Duchess stood stock still, head raised against her halter. I told her in no uncertain terms that she could stand that way as long as she liked, but she would end up in the corral. She gave in, haltingly, and I got the two of them back behind the gate. Konall had wandered over to one of the outbuildings, peering in the window. He didn’t resist until he was mostly inside; the bump of the gate on his rear served as a final encouragement. Only Bess remained at large.

Bess had wandered to the far edge of the pasture, away from the gate. I took hay to her, and she let me approach. She wasn’t too happy when I grabbed her halter, but she didn’t resist much as we walked down to the gate and into the corral. 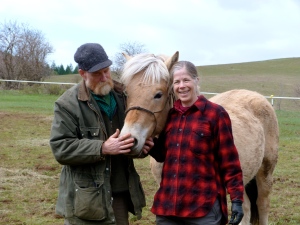 Gary and I meet Konall.

How did this happen?  Thursday, after Gary left, a fellow from the Department of Natural Resources stopped in unexpectedly to talk to me about forest health and cost-sharing programs available to landowners to improve the health and fire safety of their forestland.  He had let himself into the corral, and when I first saw him his back was to me as he latched the gate shut. I slip in and out of the corral between the wires rather than risk four curious horses and an open gate, so when we left the pasture we ducked between the wires. The latch is a two-pronged temporary fix Gary worked up, a hook and a clasp. My best guess is that our visitor latched the hook but not the clasp. And I, of course, failed to check.

It was a serious lapse. I went most of the day thinking the ponies had barely made their escape when I found them, congratulating myself for getting out to them early. But later in the day, as I was on a tour-de-poop picking up Ella’s droppings, I found evidence the horses had truly gone walkabout. That sobered me.

We don’t have this kind of excitement every day, thank goodness, but our days are full and we go to bed happy, tired, and thinking of all the things that didn’t quite get done that day. Before focusing on fence-building, Gary had been working on the kitchen. We have cabinets coming in a week or so, and he’s furring out the log walls so there’s a straight surface to affix the cabinets to. The walls bow outward, about five inches from the ground to countertop height, and the electrical wiring is something of a mystery. Gary tore most of the carpet out downstairs – too disgusting for words – and when we can we’ll stain the cement pad and use throw rugs as needed. Outside we’re picking up debris from a single-wide the previous owners had – glass, fiberglass, foam insulation, and miscellaneous debris like plastic salt shakers, everywhere.

Driving East on the Columbia Gorge.

All this work means plenty of errands. The nearest Home Depot is in The Dalles (rhymes with gals), nearly an hour away, though it is a beautiful drive along the Columbia Gorge.

We’re continually in need of firewood, so Gary has taken down some dead standing trees; I collect the wood in a cart and stack it on the porch. We have apple trees waiting to be planted, once we figure out where we want them and how to protect them. We’ve collected manure for our compost pile from neighbors. In early May we’re expecting our high tunnel (unheated greenhouse) in kit form, and need to find just the right place for it, considering light and wind. We were hoping to fence the garden and high tunnel in with juniper posts (they last forever, untreated, and juniper has become a water-sapping invasive species in eastern Oregon) but procuring them is a challenge.

If we don’t see deer on our hill in the evening, we’re not looking!

We’ve seen deer, turkeys, ducks, a skunk (first time I ever heard Gary scream!), heard fox, and seen elk tracks. We have an enormous flock of robins in residence eating our good earthworms; we see and hear countless birds. A chorus of frogs serenades us when the evening is warm. In the true style of spring, on a given day we may have sun, rain, hail and snow. Wildflowers (or noxious weeds, I’m never sure which) are starting to bloom.

Every day we awaken with new ideas and much to do. Our work is (usually) our fun.

This is, indeed, a great escape.